Jesus, please come and eradicate this evil that is Islam.

But we were forewarned that it was coming. How long, O Lord, how long? …

Qur’an Sura 8:12, 55, “… terrorize and behead those who believe in scriptures other than the Qur’an … Surely the vilest of animals in Allah’s sight are those who disbelieve [non-Muslims] …”

Revelation 20:4b, “And I saw the souls of those who had been beheaded because of their testimony about Jesus and because of the word of God. They came to life and reigned with Christ a thousand years.”

These Somali gang-bangers MUST be deported immediately after their prison terms are complete. NEVER mind their putative ‘human rights’. They never considered the Human Rights of their victims. 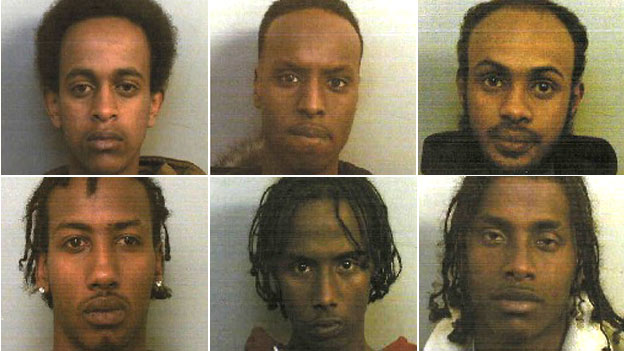 Details of the first case, which happened in 2013, can only now be reported after legal restrictions were lifted.

Thirteen men have been convicted of a string of child sex crimes in Bristol involving the abuse, rape and prostitution of teenage girls.

Bristol Crown Court heard one victim, aged 16, was assaulted by five Somali men after she was moved to the city while in the care of another authority.

Her 14-year-old sister was raped by a member of the gang while visiting her.

The inquiry led to police uncovering another gang of Somali origin who had been abusing four other girls.

The four teenagers were paid £30 or given drugs, alcohol and gifts to perform sex acts on older men from the Somali community.

The court heard some were…

And now Russia have offered to help Iran with building its nuclear devices. God help us all.

[T]here is not a single aspect of Iran’s nuclear program that has stopped advancing. On the contrary, they are making progress by leaps and bounds.

You’ve got to hand it to Obama. He is no slouch when it comes to redefining reality.

He can look at an elephant and proclaim it a donkey without a bat of the eye. Or in the case of Iran, look at spinning centrifuges and see no threat.

Over the weekend he told George Stephanapolous that the nuclear deal with Iran, which his negotiators extended for another eight months on Monday without a single concession from Iran, has “definitely stopped Iran’s nuclear program from advancing.”

Serve Him in the Waiting

Could you use a chuckle today?  This will make you smile.

Someone is trying to create a race war in the USA. This is presumably to allow a nefarious Police State to emerge without too much hostility. People will become so fed up with the lawlessness, they’ll even put up with losing their rights under the constitution.
The checks and balances have been erased by Obama.

It is said that a ‘picture can tell a thousand words’. THIS picture tells of six million words.

I have enjoyed working with many of you over the past year and admire your concern, passion and dedication. Thank you so much for all of your hard work. As Ambassadors of Education and Inspiration our efforts in the next five days are perhaps the most important to date.

Once again I am asking each of you to choose action over apathy; faith over fear; and resolve over resignation. All it takes for evil to prevail is for good people to do nothing… and evil is certainly beckoning.

At stake is our security and the security of our loved ones. At stake is the survival of Israel and the free world. And together we can make a difference.

A Veteran died today. I honour him. As should you.

Only a slave-girl would have sex with this ugly bastard. Because they have no choice

“Do what thou will. That is the whole of the law”, says evil Satanist Alistair Crowley. Most ’60s culture, Free Love, do your own thing etc., were all variations on that Satanic Law.

So, they have foiled this planned attempt on the Queen…this time. How often can these plots be foiled?

Because this 88 year-old Queen has evidently proven herself to be such a monumental threat to Muslims all around the world. Or maybe they just want to see Prince “Defender-of-Islam” Charles take the throne …

Hadith, Bukhari 9:88:219, “When the Prophet heard the news that the people of the Persia had made the daughter of Khosrau their Queen (ruler), he said, ‘Never will succeed such a nation as makes a woman their ruler.'”

Islam: Nations With Queens Are Doomed To Fail

Stuff.co.nz – “A plot to kill Queen Elizabeth has been foiled by British police.

Police have arrested four Islamic terror suspects who were allegedly been planning to stab the 88-year-old monarch to death at the Royal Albert Hall, The Sun reported.

The Queen had been due to attend the Royal British Legion Festival of Remembrance at the Hall today and both she and UK Prime Minister David Cameron had been informed of the threat, the…

One day, one of these bombers WILL get through. Then what?

The men were detained in west London and High Wycombe by counter-terrorism police.

The four, aged between 19 and 27, were all taken to police stations in central London after their arrests.

Police said one of the men was arrested in a car in a street in Southall, with armed officers assisting, but no shots were fired.

Pat Condell shines a light on Britain’s ‘Progressive disease’.
1400 raped children by Pakistani Muslims in Rochdale. Don’t you get it Britain? We’re under siege.

I wonder if the Iranians realize that Obama is Gay and living with a bloke called Michelle (Michael)? I wouldn’t go to Iran, Obama. They hang Gays there.

When will these idiots realize; Obama is a Narcissist. He couldn’t give a flying Fu*k about the ‘Party’ if he’s not running on the ticket.

Democrats were squirming in their chairs last night after losing the Senate to Republicans, but Senate Majority Leader Harry Reid is irate, and he has only one person to blame for the devastating loss.

Sen. Reid was ousted from his position, and it seems he’s taken a move from Obama’s playbook and is passing the buck for his own incompetency. However, Reid’s finger-pointing might actually be warranted.

“The president’s approval rating is barely 40 percent,” Krone told the Post in the days before the election. “What else more is there to say? … He wasn’t…

I think Erdogan could be the anti-Christ.

Socialism must be Forced upon the People…

They’re not going to want it.

Obama Care has never had the approval of a majority of the population in any poll. Never.  Not once. Not now.

Socialized Medicine was Forced upon the American People without a single Republican Vote.  Not one.

It was Forced Upon us.

Amnesty does not have the approval of a majority of the population. Not once. Not now. Not at all.

It will be Forced Upon us.

The President said today, in no uncertain terms, ‘what motivates him and his staff will not change’.  Clearly, from his 2006 ‘The Blueprint for Change’ to the Present Day, it is Socialism that motivates this President and his Staff… as well as his Party.

So someone tell me what has…

Well done America. Finally woken up. Now we need to wake up the UK.